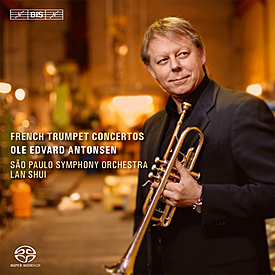 If the Baroque period may be regarded as a golden era for trumpet virtuosos, the centuries that followed proved far less glorious.

Apart from its uses in military contexts, the trumpet was largely relegated to a secondary role, 'confined', as described by Hector Berlioz in 1844, 'to the unworthy function of filling in, or made to sound two or three commonplace rhythmical formulae.'

This would however change in the 20th century, when the development of the valve trumpet had been accomplished, and the arrival of jazz reminded composers of the instrument's potential. In France, where jazz enjoyed a greater influence on classical composers than perhaps anywhere else, there was a regular explosion of works for the instrument. And the importance of jazz is demonstrated by André Jolivet's comment to the soloist who was to give the first performance of his Second Trumpet Concerto: 'But, my dear fellow, Louis Armstrong is doing wonders in the top register. Why should this be impossible for a classical player?'

Celebrating the composers responsible for this renaissance for his instrument, Ole Edvard Antonsen has gathered five works composed between 1944 and 1966 - ranging from the colourful concerto by Henri Tomasi to Alfred Desenclos' opulently orchestrated triptych Incantation, Threnody and Dance, and taking in Jolivet's first attempt at a concertante piece for the trumpet: the Concertino for Trumpet (also known as 'Trumpet Concerto No.1'), with string accompaniment and an important part for piano.

Described as being 'more than a virtuoso: a phenomenal artist' in the French magazine Diapason, Ole Edvard Antonsen here receives expert support from the São Paulo Symphony Orchestra, praised worldwide for colourful performances of great vitality of music by Hindemith, Richard Strauss and Villa-Lobos.